#1. Secret of the Lost King
Jack, Ellie, and their friend Molly share a dangerous memory. A memory that the Emperor Morogh wants his hands on. As the Emperor’s forces chase them, Jack must find an old enemy of the kingdom, rescue a lost king, and discover the truth about his own memories.
purchase 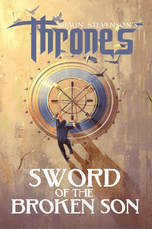 #2: Sword of the Broken Son
​Apparently the kingdom needs saving. Again. Molly must reunite with old friends and discover new ones as she journeys across kingdoms to save Tanniyn from an unstoppable enemy.
purchase 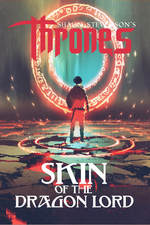 #3: Skin of the Dragon Lord
War is breaking out in the kingdom of Tanniyn. Jack is missing. And Ellie is having strange dreams of a desert land from thousands of years ago. But beneath the surface of a land straining against the seams, an ancient evil is brewing and ready to break free.
purchase

#4: Song of the Dead Prophet
Darkness grows across kingdoms as full war has arrived at Tanniyn's doorstep. The only hope for peace now lies within the song of a dead prophet, a song no one within a hundred years has ever heard.

#5: Sin of the Northern Kings
They disappeared hundreds of years ago, leaving behind vast castles in the mountains. Now Molly and Jack must discover the secret that drove the Northern Kings away all those years ago before the dragon returns to power and destroys them all.

#6: Shore of the Shattered Lands
​As the destruction of the world reigns imminent, the last bastion of hope lies in a place no one has ever found: The Shattered Lands. And in order to reach such a place, Molly and Jack will have to find the missing Prince Ethen, who has a spark of darkness all his own.​​

#1. Wings of Honor
Maria Fellbane is a child borne into a world of tragedy and fear, ruled by a tyrant Aragnarian king. Persecuted and desperate, her people are the last Followers of The One, the Everlasting ruler of their realm. When everything is taken away, will she be able to save her family with the help of a mysterious Aragnarian leader and his warriors?
​​
​
purchase

#2 Wings of Darkness
For the first time, Maria and her people are free from King Raveyn's iron grip, and have found refuge in Aragnar, the very country in which his throne stands. The peace is short lasting, however, as a great menace stirs in the shadows, waiting to strike. Maria and Aleron must depend on one another more then ever before in a desperate race to survive.

#3 Wings of Revelation
The mighty Aragnarian kingdom Arinum has fallen, razed to the ground in dragon fire, and the whole world will shudder in its wake. A terrible conspiracy unfolds, as Aleron uncovers how deep Lucius's grip on his country runs...at great cost. Desperate to rescue him, Maria will make a choice that will forever alter the fates of many, to save the man she loves.
​#4 Wings of Redemption
Helpless in the clutches of Lucius, Maria finds herself challenged unlike ever before, as as everything she believes is tested. Wounded but free, Aleron is faced with a difficult choice; should he allow his uncle Raveyn to pay for his crimes? Or can Raveyn be a saving hope? The final battle is coming...and no one is prepared for the ultimate cost.

The five islands of Abra have always been home to Runners -- sent on missions by their owners. When Eric is conscripted as a Runner and discovers an incredible power, he must race against an evil Queen to rescue a mysterious girl who has power of her own.
purchase

#2. The Barren Prison
​As Eric goes into hiding on the distant island of Uthen, he discovers a mysterious prisoner who beckons to him for help. Eric embarks on a journey to the Barren Prison, an impenetrable fortress on Uthen while eluding the hundreds of Gratta's runners who are on his tail. Because the promise had been made: release the prisoner and he may be able to free them all from the grip of the clasp.

#1 The Forested Keep
#2 Behind the Waterfall

#1. Ransom's Ruin
Shiloh's worst nightmare has become a reality. Her tiny nation, Kelonia, has been infiltrated by demon-affected soldiers called Dissidents. She must figure out how to protect her sister as the Dissidents start scouring the nation for teens to recruit for their army.
Purchase

#2. The Fugitive's Flame
Shiloh is trapped between demons and certain death in her fight to protect her sister from the Dissidents. She knows she is not the only one who refuses to choose between two horrific outcomes. She must navigate between an out of control government, a dragon, and demon-affected soldiers to get as many Kelonian citizens to safety as possible. ​
purchase

#3. Dust and Defiance
Utter chaos has descended on the tiny nation of Kelonia. There is no government. There is no safety. Everything Shiloh knows is slowly turning to dust. Shiloh must find the courage to forget her own needs and help as many people as she can before time runs out. ​
purchase

#4. Rebels and Refugees
Distrust and fear has plagued the citizens of Kelonia for far too long. They need leaders they can trust so they can start rebuilding their fragile nation. The people of Kelonia must learn to put down their weapons and open their minds to a new way of thinking.
purchase

#1. The Fury Beneath
purchase

It's Under the Floorboards